In the Southeast one of the biggest fears of homeowners and people who work or play outside is venomous snakes like copperheads. However other non-venomous and beneficial species of snakes are often misidentified and killed. Here is how to tell if a snake is a copperhead snake or the harmless northern banded water snake. Both look similar, but they have some key differences. 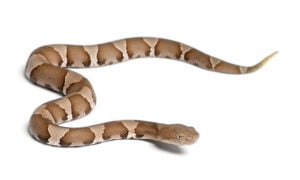 Copperhead snakes are part of the pit viper family and are classified as venomous snakes. They are also in the genus Agkistrodone, which includes the cottonmouth or water moccasin species. Copperheads, along with most venomous snakes, have a triangle shaped head. They’re known to be fairly aggressive and typically give no warning signs before striking. If they feel threatened by a human or animal they will strike. Because of this, they typically bite more people in a year than any other snake. However, their venom isn’t as potent as other species. While getting bit will no doubt hurt, the bite usually isn’t fatal. If you have a copperhead living around your house and you have children or pets, you may want to think through your options and call AnyPest, Inc. With that being said though, the non-venomous snakes are more helpful than harmful. 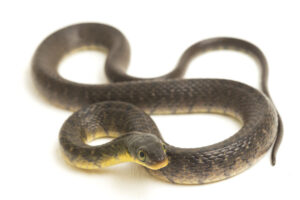 The North Georgia water snakes that people often come across are the Banded and Northern species. These snakes have bands that are wide on the top and look borderline symmetrical while the Copperhead’s pattern and band is narrow on top and looks more like an hourglass. That can sometimes be hard to spot, so taking a few extra moments to get a good look can often help you pick out this key differentiating factors. There are other species of water snakes in the Southeast as well, like the brown water snake. In that species, their bands don’t connect or wrap all the way around. Instead they are broken or split across the top. Water snakes in North Georgia have a head that is in line with their body and more narrow, straight and slightly rounded.

A quick way to tell if a species is a water snake is that water snakes do not swim high on the water and their head is not elevated when they swim. Copperheads will very rarely go in the water but they are typically found elsewhere. When water snakes are threatened while swimming, they will almost always try to get away by diving underneath the water. 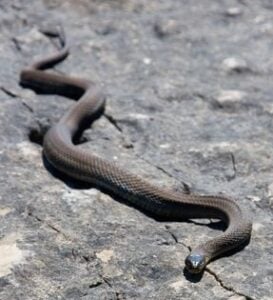 If you see snakes in or around your home, you should call AnyPest, Inc as soon as possible. We will be able to identify whether or not the snake is venomous, the best way to remove the snake, and how to prevent snakes from entering your property in the future. At Any Pest, Inc we have been providing expert pest and wildlife control to Georgia residents for over two decades, and we have plenty of experience with snakes. You can trust us to provide you with the most efficient, and professional pest removal services in the metro-Atlanta area.