Termite infestations are one thing that every homeowner hates to deal with. In Georgia, termite invasions are amongst the highest in the United States. In fact, it is estimated that as many as 1 in 5 homes in Georgia either has been or will be attacked by termites. With that being said, there are no less than three different species of termites ready to turn your home into their feeding ground. Employing Any Pest to maintain your termite problem is always a good idea, but there’s also nothing like good old-fashioned knowledge to help you in fighting potential infestations.

The Eastern Subterranean and Formosan termites are both in-ground dwellers that can enter your house through flooring. They can squeeze through gaps less than one-sixteenth of an inch wide or eat through a rubber expansion joint to gain entrance. They live underground because of a constant need for water and moisture.

Do I Have A Termite Problem?

The termites in Georgia that do all of the damage to your home are known as ‘workers’ in the termite colony. They can be identified by their size and color. The other most-visible termites are called ‘swarmers’ or ‘winged reproductive’. These termites are the colonists of the nest. Their primary job is to form new colonies. They sprout wings and find another suitable location to infest. In Georgia, they generally swarm in the spring and early summer and are unmistakable by sheer numbers. 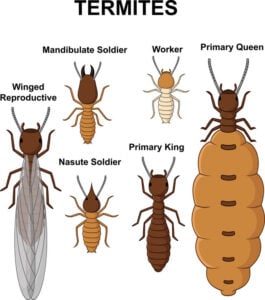 Beyond finding the insects themselves, there are also other visible signs of a termite infestation in your residence, including:

If you have noticed one or more of these signs, you need to investigate a potential termite infestation further, and quickly. Be careful not to rip open a colony. Eastern Subterranean termites, especially, will move on to a different area if disturbed and cause damage to previously untouched parts of a structure.

Also, do not mistake a swarmer for a flying ant. It is an easy mistake to make, but a close inspection of the two insects reveals differences:

How Do Termite Colonies Form

All termites live in large colonies headed by a queen, king, workers, soldiers and swarmers. The queen can live more than 25 years and is much larger than any other termite in the colony. She lays the eggs that keeps the colony going, sometimes more than 2,000 a day. The workers chew away at wood, construct tunnels and repair and widen the nest. Soldiers defend the colony often against ants, and are noticeable due to their enlarged heads and jaws. Termites are also not afraid to travel in search of food. Formosan termites will scavenge as far as 400 yards away from the colony and Eastern Subterranean termites will travel up to 100 yards looking for fresh food/wood. 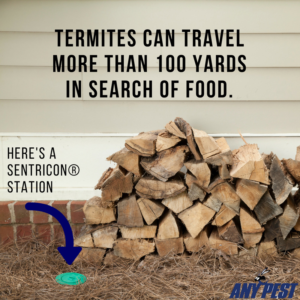 Termites in Georgia are persistent and a total nightmare if they take over your home. Stay on top of treatments, especially during the spring and summer when new colonies are forming and swarmers are in search of a new home. Prevention is the best method of avoiding termite damage, and Any Pest can provide several measures to keep your home at the lowest possible risk.

If you discover a termite infestation, do not hesitate; call Any Pest right away and limit the damage in your home. Any Pest solves your termite problem by installing a technologically-advanced bait system that will systematically eliminate each and every termite. These insects can pose a serious threat to the structure of your home so it is imperative that you make sure to take action before the problem gets out of hand. Any Pest provides free termite inspections and termite control for residents and business owners in Kennesaw and throughout metro-Atlanta.