The Brown Marmorated Stink Bug, more commonly called the stink bug, is an insect native to Japan, Korea, China, and Taiwan. Today we see stink bugs everywhere and during the winter months, they seem to invade our homes and populate our living spaces without any rhyme or reason. Stink bugs were actually never seen in the United States until they were accidentally introduced in Allentown, Pennsylvania in 1998, but stink bugs now inhabit a majority of US states and are considered common pests.

Why are stink bugs so prevalent in the home during winter?

Stink bugs are a year-round pest in the US and can cause major damage to crops and farms during the growing season. They feed on apples, stone fruits, and ornamental plants and can cost farmers and agricultural growers millions of dollars in crop loss each year.

However, during the winter months stink bugs go through a process called diapause, a state of hibernation in which the insects are very inactive, do not reproduce, and stop feeding.

It may feel like an army of bugs has stormed your home during the winter. Stink bugs seek warm shelter to begin their diapause phase and our homes provide the safety and temperature they need. They will typically congregate on the sunniest or warmest side of the structure. Stink bugs also release an aggregation pheromone to attract others to their dwelling once the shelter is established. Hence the immense amount of them found inside our homes. 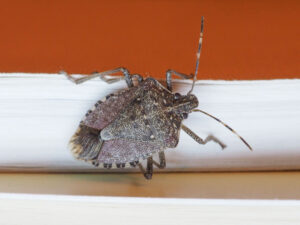 During diapause, brown marmorated bugs pose little threat to crops, fabrics, food or people. They are merely a nuisance and inconvenience. Diapause causes the insects to be disoriented, sluggish, and fly around as if in a daze. Ensure that your screens and windows are sealed tightly and remember, the best weapon for any pest that gets in your house is a vacuum.  Suck’m up!

As with any indoor insect or pest, calling Any Pest will be the first step in removing and preventing stink bugs from your home. With over 30 years of experience, Any Pest has the trained technicians to help with any pest issue, big or small.

We adhere to the highest standards and stay up-to-date on the latest industry technology and information. We offer free consultations, prompt service and customize all plans to meet your specific needs. For a more environmentally-friendly approach, inquire about our botanical and Eco-friendly pest control products. We have affordable pest control plans for the protection of your home and family and offer referral discounts for customers with existing or recurring service agreements – call us today for a free consultation or contact us online!